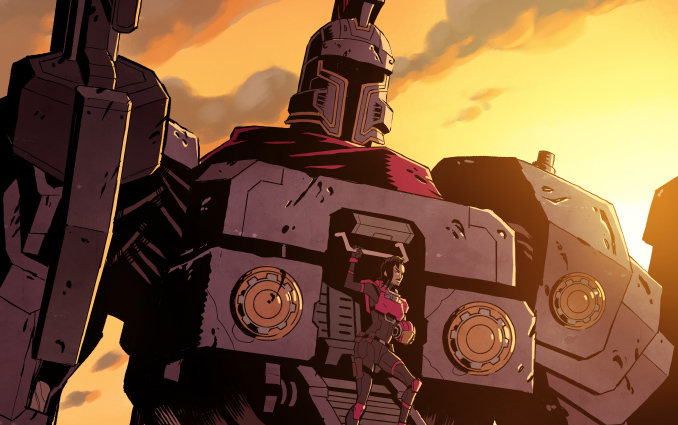 The Origins of Flatline

By: Max
In: Blog Posts
With: 0 Comments

Private James Olark huddled against the rough bark of the Owlee tree, which jabbed and clawed at him despite the thick camouflage fatigues he wore. The heavy tube of the missile launcher pressing against his back wasn’t helping either, but the 103rd Lorian Light Company prided itself on its discipline and James would rather have the bark strip the skin from his bones than let his squadmates down. Somewhere beyond this grove, there was the earth-shaking whumpf as a mech slammed into the ground, and James found himself hoping it wasn’t one of theirs. Missiles, lasers, and shells continued to light up the night sky as hundreds of tons of steel and flesh went to war. Overhead, a brilliant star burst into being as their target flared her jump jets. It was amazing that such a damaged machine could walk, let alone fly.

Its right arm had been shot away, one of the legs was locked into an odd position, and parts of the engine were visible through craters in the beast’s chest. This should be easy James though, as he shouldered his launcher. The heavy warhead wasn’t carrying its normal explosive payload, but one designed to burn out the pilots of those massive mechs instead. James sighted up on the cockpit and depressed the trigger, just as dozens of others did so. The machine ahead of them was instantly turned into a bonfire as the missiles slammed home and it began to wobble as the liquid fire dripped through its torn steel skin. James had never seen a machine so damage survive a barrage like that but his professionalism meant he was loading another missile anyway. As he did so, his brain noted with a detached sort of surprise that the mechs jets were spooling back up and that it was getting rather warm.

Deep inside the shattered, smoking cockpit Lady Alexandria of the Magistracy of Canopus furiously turned off every safety override and muted every screaming siren as she locked back the throttle on her jump jets. She’d give those ants crawling around outside a taste of their own medicine. After all, she was already on fire, so what was the harm in setting this cursed forest ablaze? With a snarl, she rose on a column of fire that torched the surrounding trees and flung her a hundred meters away. Her damage leg finally gave way under the abuse, but she didn’t quite smash cockpit first into the ground. What was left of her sensors piped in the screams of burning soldiers and their munitions cooking off in the roaring inferno she had created, and with a grim smile she dragged her battered mount to its feet as she scanned her displays for her next target.

As a character, Alex really came into being following a session of Battletech that I was running with my longtime group of close friends. I’ve always loved Battletech (Mechwarrior 2: Mercenaries was the first video game I ever played) and read every book I could get my hands on as a kid, so it was with a huge amount of delight that I introduced my friends into the world of heavy metal mayhem. Following a string of particularly lucrative missions, my players found themselves forced to dig out a combined force of infantry, medium mechs, and tanks from a heavily wooded area. The group’s dedicated scout, piloting a Phoenix Hawk, found herself battered after stumbling across a Hunchback and a quartet of Bulldog tanks. She jumped over the nearby hill, hoping to buy some time to cool off and come up with a plan in the dense forest she had landed in. Instead, she was given a warm welcome by a platoon of infantry loaded with Inferno missiles designed to cook a pilot alive inside their mech. Despite already fighting to override her auto-shutdown, she decided she would go down fighting by turning her jump jets on those pesky infantry. After being warned that doing so would probably see her explode as her beleaguered engine finally melted down, she decided to go for it anyway with a delighted “Fuck ’em, they shouldn’t have set me on fire!”

I originally conceived of Flatline as a short story, or maybe a novella, but found that in the world of giant robots sometimes words don’t do the scenes justice. Diego and I had previously produced a micro-comic (at least, that’s what Google tells me an 8-page comic is) called The Hunt, which adapted one of the short stories found in Tales from the End. The Hunt would go on to be #1 in fantasy comics during Amazon’s free comic day beating out Adventure Time and Avatar the Last Airbender. I took this as a sign that a comic by an unknown author had a chance at being well-received and sent off an email to Diego asking if he was interested in our biggest project together yet. Diego, for his part, was ecstatic to be working on a comic about giant robots, so Flatline ended up being a passion project for both of us.

Going into Flatline, I had a pretty clear concept of who Alex was and what she looked like. For her machine though all I had was the beginning of an idea which was “Giant Robot Centurion.” Diego was able to take that idea and some pictures I sent him and turn them into Bellus. Working with Diego is always a pleasure, and I’ve found our creative process to be much more involved. He and I will freely exchange ideas, and more than once I’ve deferred to his judgment on a character or scene. I can only hope that he enjoys reading my somewhat long design documents as much as I enjoy seeing what he creates from them.

Once we had these character sketches down, we went over the initial script (as this was the first comic script I had ever written) and modified it as necessary. From there, we were off to the races! Diego spent months sketching, drawing, inking, and shading its pages. Initially, we had planned on Cry Havoc being in black and white (with one page in full color), but after playing around with coloring in a page or so myself I decided to take the plunge and color the other pages myself (seeing as I couldn’t afford a colorist, for the future volumes we’ll be working with David Aravena as our colorist). After another few months, Flatline was finished, which raised another question? Go straight to Amazon, or try and get a print run funded? After some research and deliberation, we decided to make a go of getting the funding through Kickstarter.

Throughout the process of getting Cry Havoc funded, I was supported by my friends, family, and Diego (I like to think of him as a friend, but he deserves a shout-out all for himself). Now that Cry Havoc is funded (you can expect a detailed breakdown of how the funding was spent next week), it’s time to begin planning the next volume, Let Slip.